The role of coaching and mentoring in supporting black academics

by Ellie Highwood and Alice Mpofu-Coles

Last week, I co-wrote a blog for SUMS Consulting about the benefits of coaching for academics leading teams and departments at this challenging time. A friend contacted me and suggested I write about the benefits of coaching and mentoring for black and other under-represented groups in academia. Great idea, I thought, but I can’t write about the lived experience of this, so we agreed to write this together. Thank you, Alice, for sharing your thoughts and experiences.

This article focuses on one particular issue, for a much broader understanding of the experiences of black academics referenced briefly here, I would recommend the articles and activities discussed on https://blackbritishacademics.co.uk/

Ellie’s view as a coach and former Dean for Diversity and Inclusion.

“Higher education in the U.K. is structurally and, in many cases, institutionally racist. If it were not, we would have more than 140 black professors out of 21,000. There would be more than 1 or 2 black professors at most U.K. Universities and black academics would make up for more than 2% of the total working at U.K. universities. There would be some, rather than none at all, black staff employed at the most senior levels of leadership in British universities in 2018-19, which ministers described as “unacceptable”, and more than 75 out of 3600 university governors would be black. There wouldn’t be more than 20% difference in the percentage of black students who are awarded a 1st or 2i degree compared to their white peers.

This is not news, but it is a reality that has hardly changed for years despite many awareness-raising efforts (there have been some improvements in the degree awarding, but the difference remains). And yes, I know many racial inequalities occur before people get to universities that need to be addressed, but even when black students enter with the same grades, they are still awarded lower degrees – so yes, universities are doing additional harm and putting additional barriers in place to black students and staff. Black students cite an academic staff body that looks wholly unlike them and in some cases has little understanding of racial identity as a contributing factor.

It is clear that something more than awareness-raising needs to happen.  Often this takes the form of initiating specific mentoring or coaching programmes for black staff, or more widely for staff from ethnicity groups currently under-represented. Sometimes, these schemes are viewed negatively as being “deficit model,” i.e. focusing on “fixing the black academic”, rather than addressing structural and institutional inequalities and racism.

Whilst I absolutely agree that we should be pushing to remove the systemic barriers as rapidly as possible – we also need to support black academics in situ now. This is about treating black academics equitably whilst we dismantle the systemic racism. Consider the middle panel of the figure below, what targeted coaching and mentoring schemes do is provide appropriate size boxes for people to stand on, recognising that these are different for different people. At the same time, we remove the fence so that individual support is not needed in the same way. Black staff, both historically and currently, do not benefit from the same informal or formal support network as white staff. 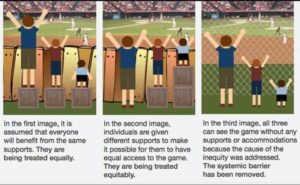 Mentoring schemes can work, and in cases where you have a senior white academic mentoring a junior black academic, there can sometimes be great benefits in both directions – that has certainly been my experience of coaching people attending BAME staff development programmes. Sometimes though, there can be too big a distance, and complications when mentoring is within line management structures, in which case coaching can provide a safe, non-judgemental and confidential space that supports development more effectively.”

“Whether it is called proper supervision or training on the job or managing how you deal with feelings,  or how you talk, coaching is essential. I have benefitted from being coached and also from coaching people myself. These are my personal experiences and might not be exclusive to every black person.

In my other life, I worked in Mozambique, and I benefitted a lot with mentoring and coaching as at first, I could not speak the Portuguese language. Although the mentoring was somewhat unorthodox –mainly through the Young African Diplomats Group – it helped me understand how systems in the diplomatic networks in Maputo worked.  These were things which you could not find in a scripted politics or the diplomatic handbook, but a verbal and code of conduct you could find in this young African diplomats group.  It was simple things like ‘taking my hand’ to go to Feira Popular – a mingling place for the local people in which diplomats went with reservations or how to socialise with the staff at Ministry of Foreign Affairs or the local organisation. Through that coaching, I managed to know local organisation which led me to win an award given to me by the then President Chissano.

In the U.K., when I arrived as a refugee, I worked in social care as a carer and I had a good supervisor.  She used her spare time to coach me about the dos and don’ts in social care as I had never worked in social care. Slowly I gained confidence, and my supervisor helped me apply for my first role as an assistant social worker as she believed that I was skilled and ‘clever’, her words not mine. I then had an assistant manager who gave me a mentor who is the one who coached me about social work, and later I decided to go to University to become a Social Worker.  All these women were not black.

I have seen similar growth in confidence in those I have coached in the past. I used to coach and train black women who worked as personal assistants in Southern Africa. The women benefitted and had a way of connecting with others, and it also built their self-esteem and confidence in their work. In Reading where I now live, I have been a chairperson and also volunteer at refugees at the Reading Refugee Support Group (RRSG).  I had the opportunity to be involved in the Women Learning Together, a Europen Union Grundtvig project. An article which describes the case was written ‘Wisdom is like a baobab tree: no individual can embrace it Working and Learning together towards empowerment of female refugees’ (Harkema & Beijer, 2012). I accompanied a few women refugees from (RRSG)  to Belgium, Netherlands, Denmark, to attend the ‘learning together’ conferences. Most of the women were seeking work and had qualifications mainly from their own original countries. In total, they were fifty female refugees of all races from at least 40 different countries who participated in the conferences. The women shared their experiences of life in Europe and their ambitions.  Some had been engineers, lecturers, businesswoman, teachers and other careers but unfortunately, they had to leave their jobs and countries ending up as refugees.  My past experiences in work never gave me work in the U.K., and I had to start again. The sessions mainly focused on coaching the women on how to evolve and find their purpose. Some of the sessions brought tears, but mostly it gave them tools to be able to know their strengths and weaknesses. One of the white ladies originally from Eastern Europe- a refugee is now a project manager for the Syrian resettlement scheme.

But confidence is about context. I am an experienced public speaker and had worked for a long time when I decided to go back to academia, yet as a PhD candidate in Human Geography researching Identity and Transnational Activities for Young People from Zimbabwe in the U.K., I found it so difficult to present my academic work and speak in seminars or conferences. As a natural public speaker who talks in conferences with over 100 people despite never having had any formal training,  it might sound unreal to be able to struggle to speak in academia. Yet sometimes things like a black person’s accent, using the wrong words in a sentence not knowing how to respond to that one ‘bowtie while male academia’ or madam ‘I know it all’ white woman in the audience can only make it difficult to excel. It might seem minute to others, but it can also affect how you write and produce work.

The space I occupy as a mature black women PhD candidate does not give me the same opportunity like the young white PhD student who is coming straight from University.  Some are often identified earlier on doing their undergraduate or masters by their lecturers and supported to apply for a PhD scholarship which rarely happens with black students. I have observed that in some departments, the white PhD students are given a chance to teach while they are studying, mentored, shadowed, and more time and money is invested in their skill-building. This is a way of coaching them for their future job and setting a solid foundation for them. They build relationships with their supervisors and lecturers.  Most jobs are found through networking, and it is the same in academia and who best to help you network, learning the system than somebody with a wealth of experience at your own University.  This is not about ‘white saviour’ or ‘fixing black academics’ it is about identifying potential and also dismantling the structures that have perpetually disenfranchised black people to attain.

Opportunities for and participation in such development activities seem to be less for black students and academics. During my research, some of the young black participants stated that they had had unpleasant racism experiences at University, and they felt that they would not continue to do a PhD.  Black women have to juggle a lot of other things in their life because of structures of inequalities in society, and sometimes this has an impact on when they start University if they get scholarships or how they excel in academia. Academia does not acknowledge either this impact of inequality or the emotions that come with post-colonial dilemmas for black people. Instead, the roles remain grounded in societal racism – the ‘master’ defines the roles typically. As an example,  in her book ‘Ain’t I Woman’ Hooks (1981) identifies that ‘that in our society white women are given grant money to research black women, but I can find no instance where black women have received funds to research white women’. In 2020 it is still the same; black women due to their identity still struggle in finding acceptance in academia or working in institutions.  Crenshaw (1989) eludes to that through her work on the intersectionality that the experiences of black women are ‘double-discrimination’ in how their personal dimension of these racialised identities of being ‘black’ and ‘female’ are objectified throughout and the need for coaching and mentoring remains as strong as ever now.”

Saskia J.M. Harkema & Catharina J. Beijer, 2012. “Wisdom is like a baobab tree: no individual can embrace it Working and Learning together towards empowerment of female refugees,” Working Papers 2012/18, Maastricht School of Management.