Equality, Equity, Diversity and Inclusion – making sense of the jargon

One thing that sometimes stops people engaging with diversity and inclusion is fear of getting things wrong. In particular, fear of saying the wrong thing. It’s as true for me as it is for anyone else. And the bad news is… you will get things wrong. I have been clumsy with words (particularly around race and sexual orientation where there are a lot of options and a considerable amount of sensitivity on more than one occasion. The good news is that in general, people have been generous with their forgiveness because they know that I am coming from the right place. If you are genuine, and show a desire to learn in those situations then people understand.

But there is a lot of “jargon” – by which I mean field specific language. Starting from the very beginning there are different terms used for trying to make the work place or indeed the world a fairer place. When I go into organisations or workshops, establishing a common language and set of meanings is important, and the best way to do this is usually to have an activity exploring what the terms mean for people in the room on that day (I have made assumptions before and it’s not a good start!) However. here is my take on the 4 main terms used.

Equality – simple enough you would think. But no, “equality” can sometimes be interpreted as treating everyone exactly the same. In some cases this could be appropriate, but most of the time the thinking is that what you are aiming for might be equality of opportunity, or equality of outcome – in both cases that might mean treating people differently (within the constraints of the Equality Act – in the UK positive action is allowable, positive discrimination is not legal – there are differences in this legislation in other parts of the world). Which leads us to…

Equity – which is another term used to describe equality of outcome mainly. The figure below is an adaptation of a  well used illustration of the difference between equality and equity. Equity rarely means treating people identically. Sometimes the image is extended to show something that some people call “justice” but for me, that is a loaded term. For me, the third panel is more like inclusion. 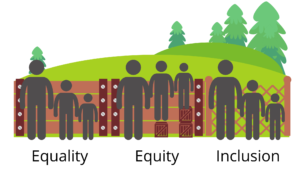 Inclusion – where the systemic issue that necessitated different approaches for different people is removed. A wide range of people are considered in the planning of events or initiatives so that people don’t need to ask for “adjustments” and organisers don’t need to ask people to declare any needs. An example here would be always providing ramp and handrails onto a speakers platform, and always having speakers use microphones. Or timing meetings so that people with school age children can attend and still do the school run. Or not arranging working lunches during Ramadan. Being inclusive can lead to a feeling of Belonging – which may be one way of measuring Inclusion.

Diversity – This is perhaps the most easily measurable thing in the list. You can count people with certain protected characteristics (especially if you ask them to declare them). But you can’t always count people with hidden diversity, for example some disabilities, neurodiversity, socio-economic background, marital status, elder caring responsibility. And if you guess you can be wrong (age, religion). But because it is measurable, there is sometimes too much focus on this part of making the world a fairer place. Diversity can be a sign that an organisation is inclusive, but not always.

Obviously these are only my personal opinions and these terms mean different things to different people. Discussing the relevance of each of these terms for your organisation is a great way to start the conversation.