When it involves public figures, racism, sexism and other hate crime or discrimination spends a brief moment in the spotlight. The racist abuse received by three black members of the England football team after the EURO 2020 final was predictable to the black community, and to many other members of the diversity and inclusion community. News reports over the following day or two continued to report condemnation of the events, and thoughts from fellow team members. By the end of day two though, national headlines seemed to be moving towards the general bad behaviour of England fans without tickets storming the stadium rather than racism. Whilst the racism did continue to be featured on the news for a further few days largely in response to statements from players, or condemnation of politicians, news moves on, and this is especially true for stories about racism.

Social media feeds were also flooded with either the racist abuse itself, or the condemnation of it. Calls for social media outlets to remove accounts came from all directions and appeared to be the focus of government action. Of course this should happen. But that would merely address (partially at best) this particular symptom of the underlying issues that allow people to think it is ok to racially abuse anyone, be they high-profile or anyone else. Similar issues make it ok to abuse people based on sex, gender identity, sexual orientation, disability, age. Not just on social media but in everyday life. #EveryDaySexism showed the degree to which women are enduring sexism from strangers, friends and family.

So whilst it’s great and important to visibly show condemnation of racist abuse on social media, I am reminded of this quote: 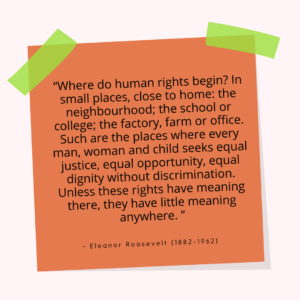 The same distancing that allows people to post abuse on social media, can also make it easier to show support. The social media algorithms also mean we can be stuck in our own echo chambers so that makes it even safer. I know that some of the hardest and most uncomfortable conversations I have had about racism or sexism or disability have been with friends and family. So many other dynamics are involved in those relationships that calling people out can have risk of all sorts attached to it. Sometimes it isn’t even safe to do so, particularly for members of a group being targeted.

But if we want to stop racist abuse, we need to challenge it close to us as well as at a distance. Sometimes I ask “What makes you say that?” intending to listen and discuss, but I don’t always feel up to having an argument, particularly if it’s a frequent occurrence with a particular individual. I’ve used phrases like “It’s not ok to say that” or “I understand that you have that opinion, but it’s not a view that we share here and I’d rather you didn’t express it in my house”. One thing I note that has changed for the better is the education that many primary school age children are getting about valuing and respecting difference. Unfortunately from our family experience, this is sometimes drowned out by other influences as they move into secondary school and everyday racism, sexism and homophobia reappear. So it’s perhaps particularly important for those of us with school-age children in our lives to have the conversations and challenge the stereotypes and views close to home.

I’m not against showing support on social media – far from it (as you’ll see from the first point below). But here are three things to consider:

This blog is part of my #EDIBeyond series. There is so much noise about EDI (Equality, Diversity and Inclusion) at the moment. I love to see the volume turned up and the spotlight switched on to illuminate the most obvious topics. But what if you want to go deeper? What if you have tried the many sets of “5 ways to be inclusive” tips and they aren’t quite working for you? This series of blogs considers what happens when you go beyond the usual EDI discussions, or indeed assessments. I’ll also share my thought processes around some uncomfortable areas, as writing helps me straighten them out for myself. We may not agree on some of these, but that’s ok. I hope they will make you reflect on what equality, diversity and inclusion really means for you and your organisation and give you some ideas for going beyond.