(The theme for International Women’s Day 2021 is #ChooseToChallenge. I am aware that being white, financially secure and with a strong support network I have privilege that allows me to challenge when it may not be safe for others to do so. Nonetheless, this series of blogs identifies the things we need to challenge to get closer to gender equality.)

How many famous women scientists from history can you name? Marie Curie? Rosalind Franklin? Jane Goodall?

When I taught year 6 classes as a volunteer science teacher, I used to ask them about famous scientists. Isaac Newton came up a lot. Galileo, Nikola Tesla, Edison, Watt etc. Occasionally Marie Curie appeared. A notable absence of women, and indeed of Black or Asian scientists or scientists from the Islamic world. I would then get them to pick a name of a lesser known scientist or inventor from communities under-represented in the story of science, go away and bring me back a picture and a couple of sentences the following week. We made a great display to go in the school corridor. 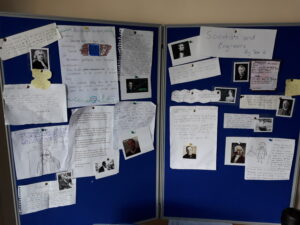 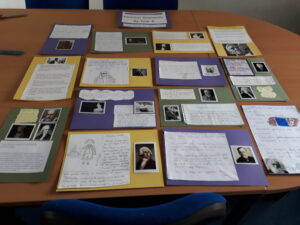 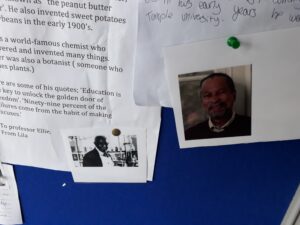 If I’m honest though, I’d not have done much better even when considerably older than them. The story of science as conventionally told has neglected and erased the vital contributions of many women in particular. From the most famous stories of neglect such as Rosalind Franklin’s role in the discovery of DNA and Jocelyn Bell-Burnell’s  role in discovering pulsars, to the less well- known women toiling away in labs and observatories for decades but receiving little credit for their work.

Amongst this group is Eunice Foote – an American researcher, inventor and women’s rights campaigner who in 1856 discovered the mechanism we know today as the greenhouse effect by which carbon dioxide traps heat and prevents it being radiated to space thereby warming the planet, a full three years before John Tyndall, the British Scientist who is usually credited with the discovery. Eunice’s original paper describing the effect was presented on her behalf by her husband as women were not allowed to present to scientific societies at that stage and this may be one reason that it is only relatively recently that her role in the science underpinning climate change research has been uncovered. There may also have been a disconnect between US and European science as it appears that Tyndall was not aware in any way of Eunice’s work.

Over the years I have discovered and been inspired by the stories of many female scientists. Preparing to teach light to a Year 6 class I came across Ibn Al Haytham and his ground breaking work on light travelling in straight lines and the function of the eye. I have been pleased to see recently documentaries on the contribution to the evolution and development of science by the Islamic and Asian worlds. We need to uncover the history that has not been written.

Of course science is not the only area in which the history has been written from mainly one viewpoint and centred only one social group. Groups subjected to societally “normalised” discrimination, genocide and systemic racism still rarely get into the history textbooks. Specialist publications from their viewpoint yes, but textbooks often not. And I suspect that despite the existence of many people’s stories via social media and indeed conventional media, official historical accounts of tomorrow’s history may still be written mainly from the viewpoint of the majority group, or the victor.

Is part of the history of your line of work, or your area of interest, curiously missing women, or other groups? If so, were they there but their contribution remains hidden? #ChooseToChallenge