#ChooseToChallenge – expectations of you based on your gender

(The theme of International Women’s Day 2021 is #ChooseToChallenge.  From March 8th to 12th I’ll be posting a blog each day focussing on one thing we can #ChooseToChallenge in order to make progress towards gender equality).

When I was 12, my male physics teacher told me “girls don’t do physics”. One 1st class physics degree and a PhD in a physical science based subject (meteorology) later, I think you could say that I challenged his expectations of me.

Today is International Women’s Day (2021) and later I’ll be addressing students from Roedean School as part of their festival celebrating “inspiring women”. Whilst I love the opportunity to talk about my former career as a meteorologist and climate scientist, and the opportunity to spread excitement about my own little corner of science, I don’t believe a lack of “inspiration” is a huge part of what is behind the still pitifully low representation of women in science and engineering workforce.

Actually, meteorology and its related subjects fares reasonably well compared to other physics and maths based disciplines. For example, 26% of the UK STEM workforce is female, but when I used to teach in a university meteorology department, our undergraduate and graduate cohorts were often much closer to 50% female. ~35% of the Met Office’s staff are women – a fact that they are rightly proud of.

Building a gender parity workforce is about much more than attracting women into it, it’s about providing a culture where women (and everyone else) can be who they want to be and are supported to achieve whatever they want to achieve in the profession. Some places get this – in academia the Athena SWAN charter mark and self-assessment process provides a framework for doing so. However, there are still many outdated and directly or indirectly discriminatory practices in every organisation.

The theme of IWD2021 is #ChooseToChallenge and there are many things that could still do with challenging in the progress towards gender equality. For the rest of this week, I’m going to post one each day – some will have a definite STEM and even meteorology flavour as I’ve been digging through my meteorology resources. Others are more widely applicable.

Today I’d like to introduce you to two women meteorologists who are examples of people who #ChooseToChallenge society’s gendered expectations. 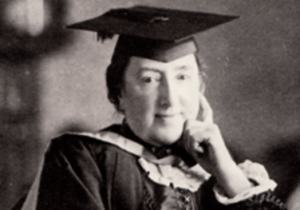 Eleanor Anne Omerod: (1828-1901) was the first woman to be made a Fellow of the Royal Meteorological Society. She became interested in meteorology because she was an entomologist and interested in the impact of weather on insects. Eleanor played a pivotal role in establishing economic entomology, the study of insects that benefit or harm humans, domestic animals, and crops, as a science of national importance.

Joanne Simpson: (1923-2010), the first female meteorologist with a Ph.D. She was also a pilot and aviation meteorologist, and mission scientist for TRMM satellite mission. The fascinating story of how she got interested in meteorology during WW2 and ended up working on the tropical cloud systems that had fascinated her as a sailor can be found https://earthobservatory.nasa.gov/features/Simpson/simpson2.php. I particularly like the quote about being told by one of the most eminent meteorologists at the time that she could work on clouds as no one was very interested in them, so it was a good subject “for a little girl to study.” Clouds are now known to be one of the most important and challenging parts of the climate system!

What limiting expectation placed on you because of the gender with which you identify will you #ChooseToChallenge?