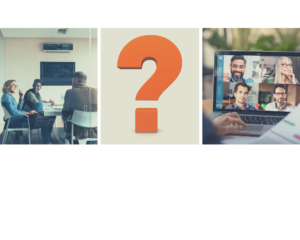 I am forced to conclude a rather unsatisfactory – “it depends”. And what does it depend on, you ask? Well, just as in the pre-Covid19 world, it depends on the intent and skills of those running the meeting. So basically, if someone is going to exclude people from whatever decision needs making (and if the meeting isn’t making a decision you might want to think about whether a meeting is the best thing to be doing – it may be but at least think about it), they will likely find a way to do it whether it’s a virtual meeting or an in-room, physical meeting.

We’ve all been in meetings, both physical and virtual, where either ourselves or someone else has been clearly excluded. Ways to be excluded include:

These things are just as easy to do in a virtual meeting as they are in a physical meeting. Additional challenges that might lead to exclusion (intentional or otherwise) from virtual meetings include:

In fact it can be even harder to speak up against bad behaviour in a virtual meeting – chairs or speakers can ignore you and on many platforms even mute your microphone. Without the non-verbal clues of “hard stares” it takes even more confidence to speak up in this situation.

I am not going to end this article as you might expect, with a list of “tips to run inclusive meetings”. There are plenty of those checklists out there already.

I am going to end by saying that the ONLY way to make meetings, virtual or physical, inclusive, is for those leading the meetings to determine that the meetings WILL be inclusive so that the decisions made there benefit from the diversity of thought and experience present. Having your managers and leaders adopt an inclusive mindset will revolutionise meetings, give everyone a voice and result in more effective decision making.

If you have found this blog interesting, why not sign up for our inclusive workplaces newsletter.